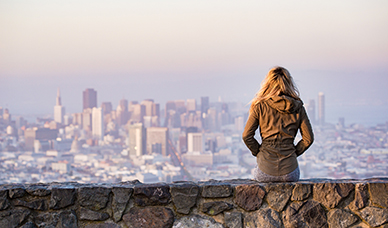 短篇优秀英语美文：love is just a thread

sometimes i really doubt whether there is love between my parents. every day they are very busy trying to earn money in order to pay the high tuition for my brother and me. they don’t act in the romantic ways that i read in books or i see on tv. in their opinion, “i love you” is too luxurious for them to say. sending flowers to each other on valentine’s day is even more out of the question. finally my father has a bad temper. when he’s very tired from the hard work, it is easy for him to lose his temper.

one day, my mother was sewing a quilt. i silently sat down beside her and looked at her.

“mom, i have a question to ask you,” i said after a while.

“what?” she replied, still doing her work.

“is there love between you and dad?” i asked her in a very low voice.

my mother stopped her work and raised her head with surprise in her eyes. she didn’t answer immediately. then she bowed her head and continued to sew the quilt.

i was very worried because i thought i had hurt her. i was in a great embarrassment and i didn’t know what i should do. but at last i heard my mother say the following words:

“susan,” she said thoughtfully, “look at this thread.sometimes it appears, but most of it disappears in the quilt. the thread really makes the quilt strong and durable. if life is a quilt, then love should be a thread. it can hardly be seen anywhere or anytime, but it’s really there. love is inside.”

i listened carefully but i couldn’t understand her until the next spring. at that time, my father suddenly got sick seriously. my mother had to stay with him in the hospital for a month. when they returned from the hospital, they both looked very pale. it seemed both of them had had a serious illness.

after they were back, every day in the morning and dusk, my mother helped my father walk slowly on the country road. my father had never been so gentle. it seemed they were the most harmonious couple. along the country road, there were many beautiful flowers, green grass and trees. the sun gently glistened through the leaves. all of these made up the most beautiful picture in the world.

the doctor had said my father would recover in two months. but after two months he still couldn’t walk by himself. all of us were worried about him.

“dad, how are you feeling now?” i asked him one day.

“susan, don’t worry about me.” he said gently. “to tell you the truth, i just like walking with your mom. i like this kind of life.” reading his eyes, i know he loves my mother deeply.

once i thought love meant flowers, gifts and sweet kisses. but from this experience, i understand that love is just a thread in the quilt of our life. love is inside, making life strong and warm..

who you are speaks so loudly i can't hear what you're saying.

it was a sunny saturday afternoon in oklahoma city. my friend and proud father bobby lewis was taking his two little boys to play miniature golf. he walked up to the fellow at the ticket counter and said, "how much is it to get in?"

as ralph waldo emerson said, "who you are speaks so loudly i can't hear what you're saying." in challenging times when ethics are more important than ever before, make sure you set a good example for everyone you work and live with.

the following words were written on the tomb of an anglican bishop in the crypts of westminister abbey:

when i was young and free and my imagination had no limits, i dreamed of changing the world. as i grew older and wiser, i discovered the world would not change, so i shortened my sights somewhat and decided to change only my country.

but it, too, seemed immovable.

as i grew into my twilight years, in one last desperate attempt, i settled for changing only my family, those closest to me, but alas, they would have none of it.

and now as i lie on my deathbed, i suddenly realize: if i had only changed my self first, then by example i would have changed my family.

from their inspiration and encouragement, i would then have been able to better my country and, who knows, i may have even changed the world.